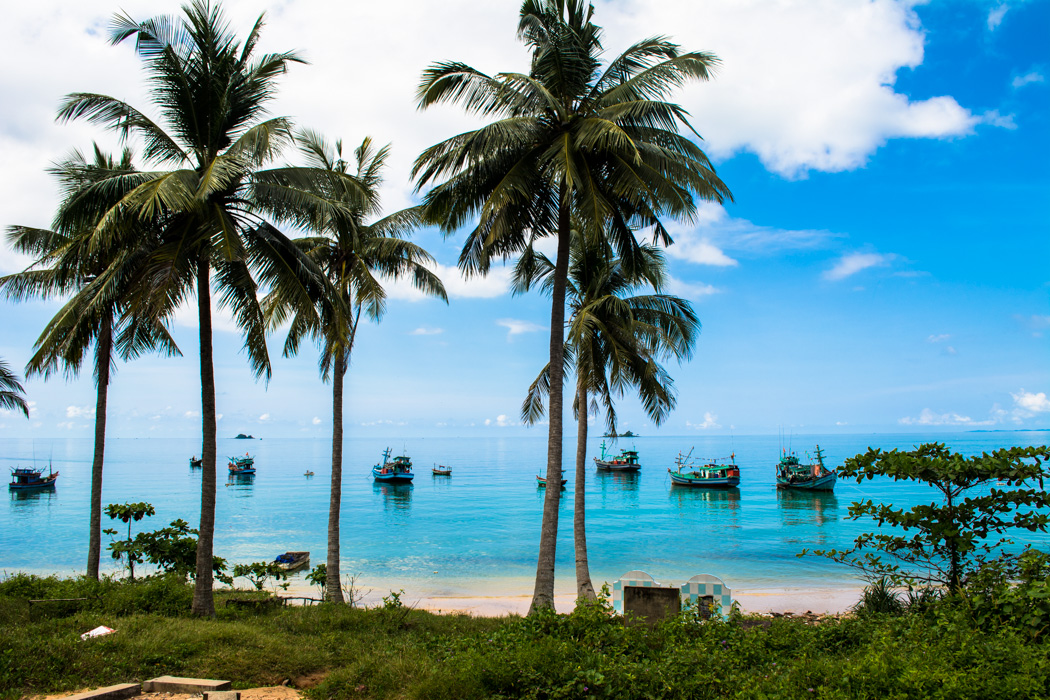 By every measure, Phu Quoc, Vietnam should be paradise with its palm trees, warm turquoise ocean, and miles of deserted white sand beaches to call your own. But just outside of the picture-perfect frame, it’s hiding a very dirty secret.
OK, “hiding” seem inappropriately mysterious. It’s not hiding it at all. It’s piled up everywhere for everyone to see – trash. The island (and you) are swimming in it.

I booked a flight to Phu Quoc as part of my hasty retreat from the smog and sweat of Saigon, hoping for a better view of Vietnam. I got a motorbike taxi from the airport into town, passing through green, rugged hills and fields. The untouched scenery seemed worlds away from the well worn paths (they’re really practically paved with yellow lines at this point) of the Southeast Asia tourist. 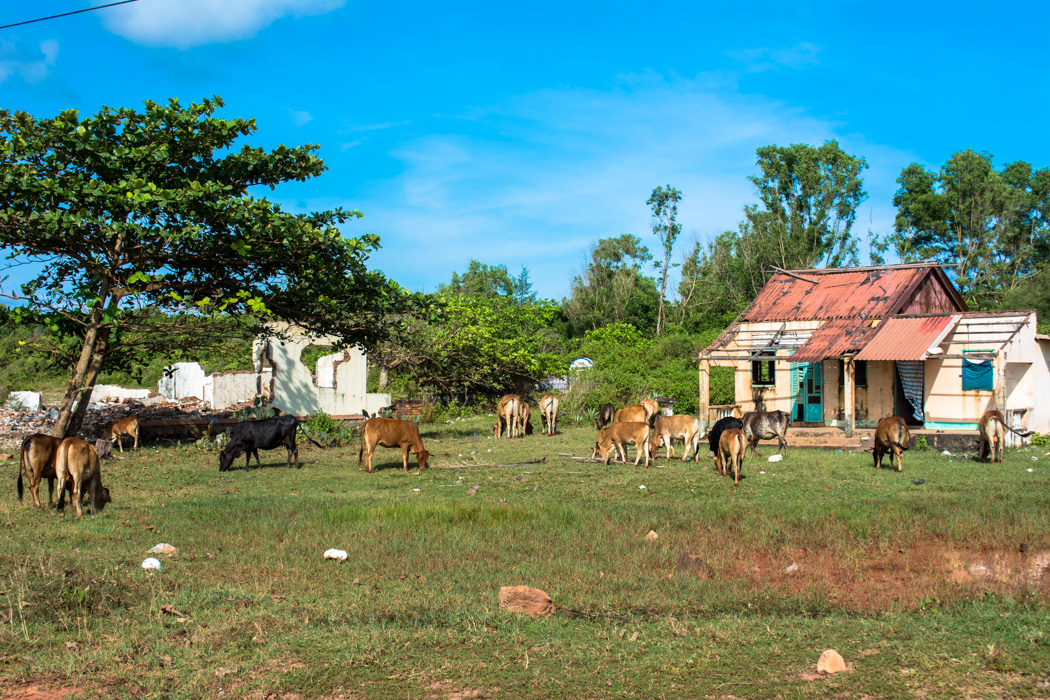 But once we reached the coast, I could see a smattering of resorts that grew thicker on the skyline the closer we got to the town of Duong Dong – the main city and tourist hub on the island.

I checked into my hotel and headed down to the beach to catch my first ocean sunset in Asia.

The sun was already low, and blues were effortlessly giving way to orange and pink hues. A group of Vietnemese men were spear-fishing on a cluster of rocks. I had stepped into a postcard. 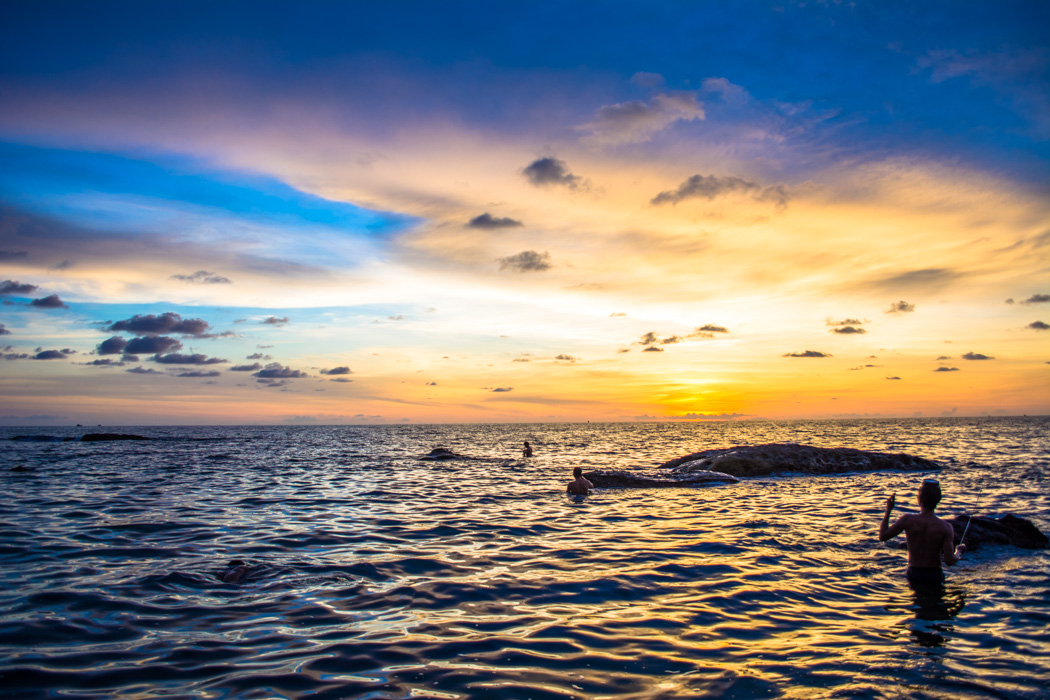 Then I turned around.
My excitement withered. Piles and piles of trash collected on the sand. Between the rows of lobster-colored tourists and blue water lay an endless mosaic of rubbish. 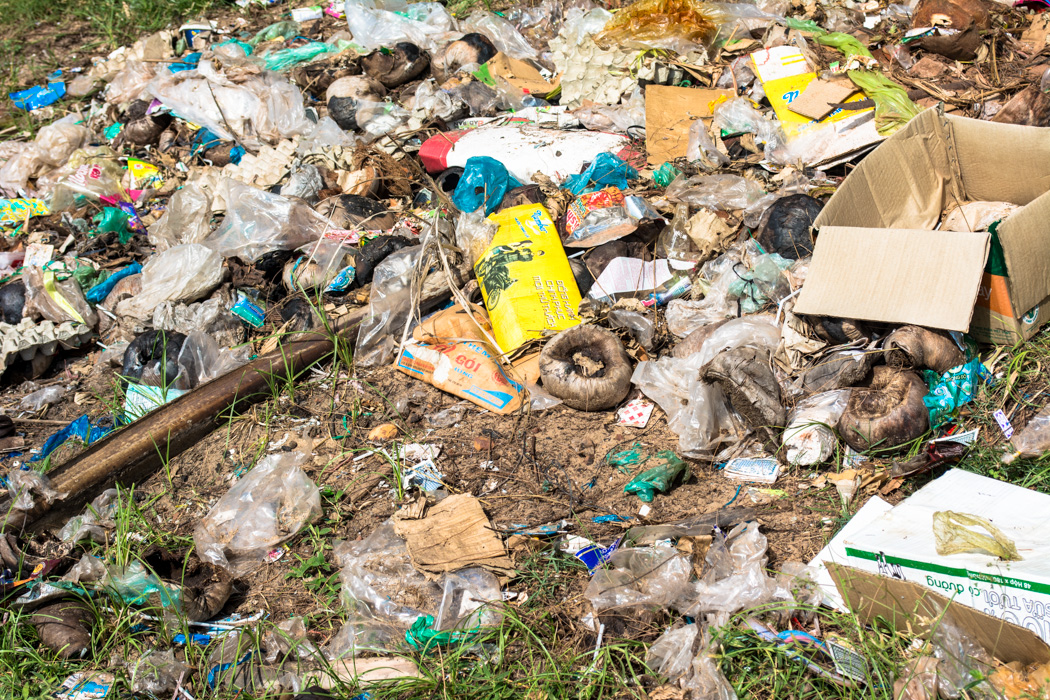 It was floating in the water, tangled with the seaweed, wrapped around the driftwood. I walked further down the beach, hoping it was some sort of fluke. But it just continued on. Rows of sunburnt westerners and piles of garbage – as far as the eye could see.

Deflated, I returned to my hotel and asked which beach had the fewest number of people (and presumably less trash). She pointed me in the direction of Dai Beach, an hour north of the city on the west coast. Resolved not to give up on my paradise just yet, I decided to rent a scooter to see if conditions were at all improved elsewhere.

I set out early the next morning, map in hand, and tried to follow road signs toward the beach. But I guess that’s the key thing about deserted beaches – they’re not particularly easy to find. I went from paved road to dirt road to a road made of concrete slabs so uneven that driving down it without being flung off elicited applause from the locals.

I stopped to ask directions from a Vietnamese man. Our conversation went something like:

“Remember when you passed that road and you thought to yourself there is no way that could possibly be the road I’m supposed to turn on.”

“That’s the road you’re supposed to turn on.”

I backtracked and eventually found myself driving along on bumpy, red dirt parallel to a breathtaking coastline of deserted white beaches, speckled with small fishing villages and open-air restaurants. 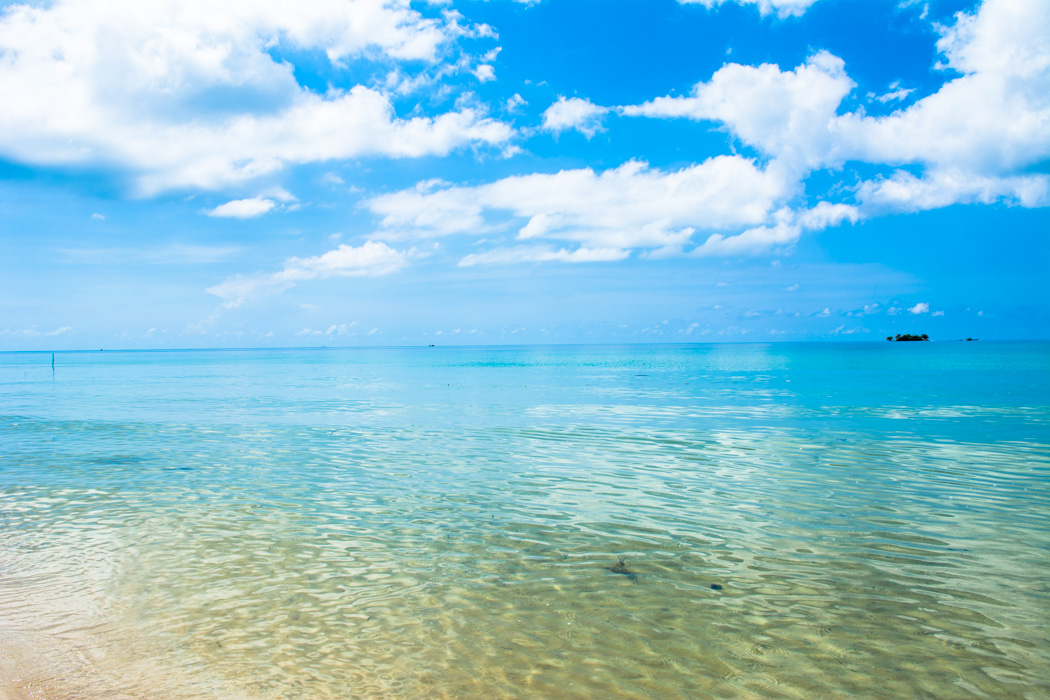 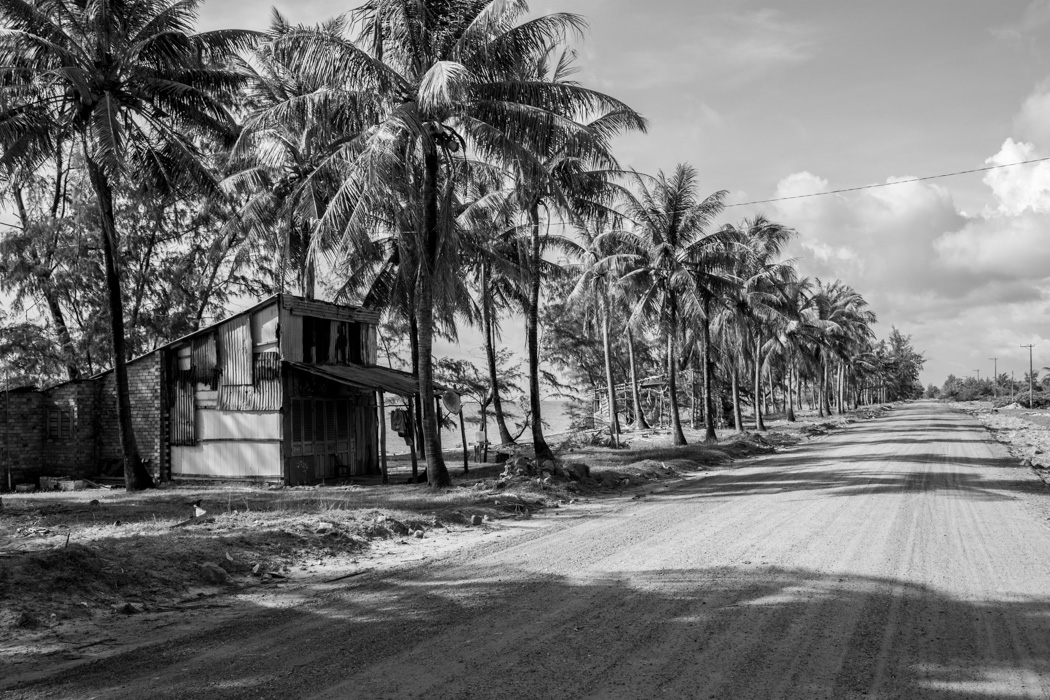 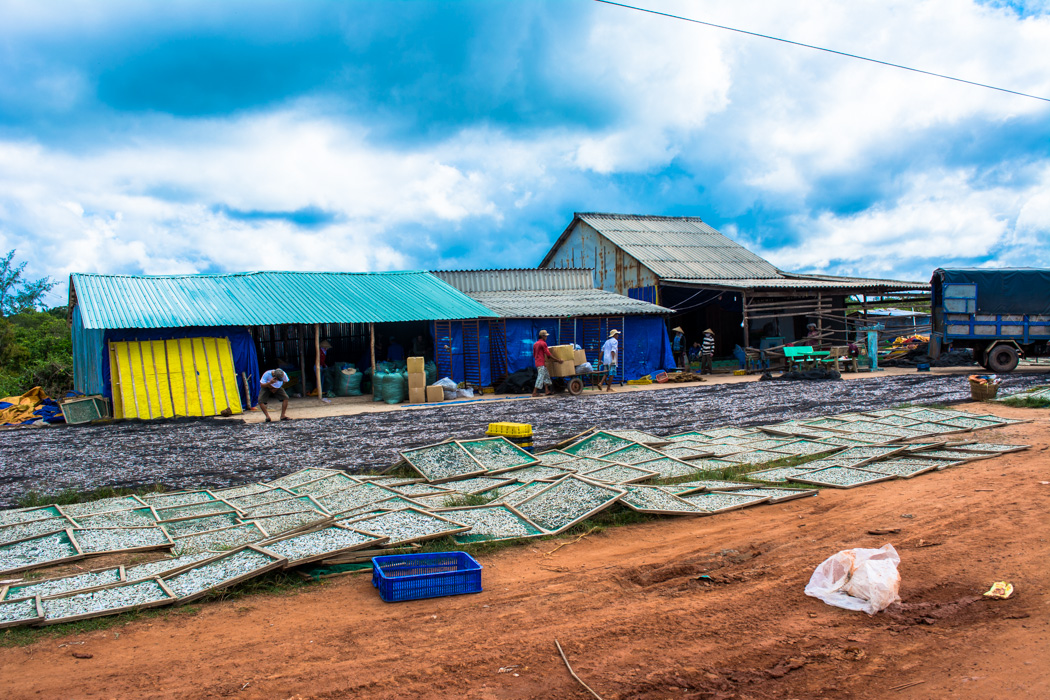 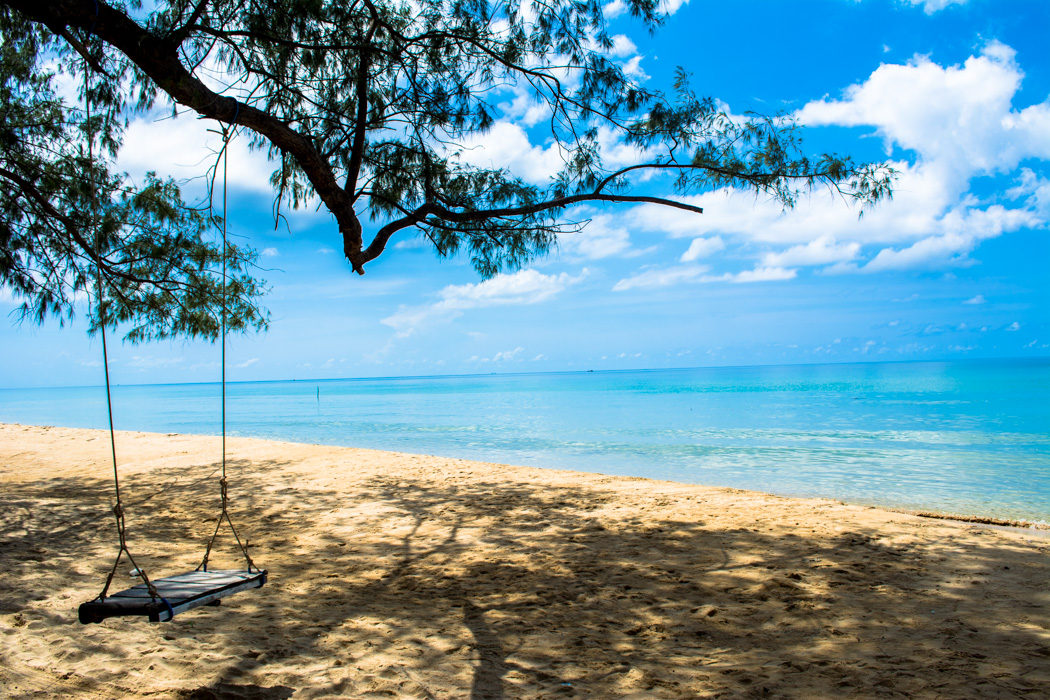 I pulled off at a small shop with hammocks set-up along the sand. It was beautiful and everything the postcards tout it to be. And it was also covered in trash. Not as bad as the main beach in the town, but enough to elicit a sigh and deter me from jumping in the water. I walked along the shore, stopping every so often to unravel a plastic bag clinging to my ankle. 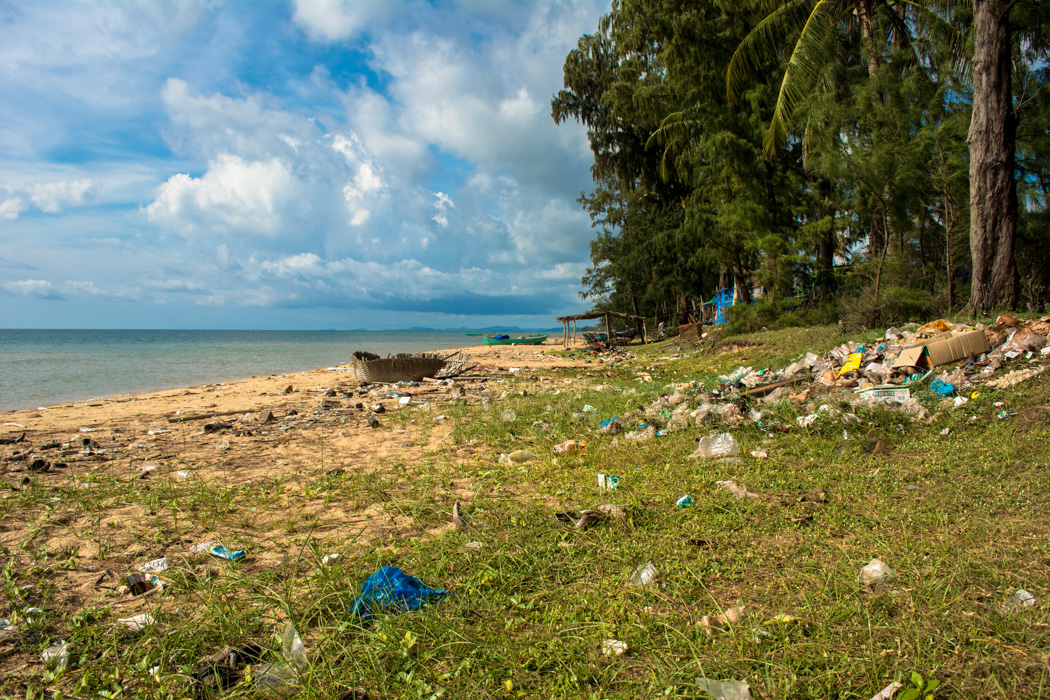 Suddenly, I had this terrible thought. What if in a hundred years we can’t swim in the ocean anymore? Seriously, like what if our grandchildren stare at us with a mix of awe and horror as we tell them about when we used to swim in the Giant Waters of Waste – or whatever they call the oceans at that point??

No. Thought must be repressed. I have sun and sand. Surely I can make this work. I retreated to the hammocks. After a bit of twisting, turning, and wondering if laying in a hammock had always required so much core strength, I finally closed my eyes. There. Eyes closed. Everything is perfect.

At that moment the rope holding up the front of my hammock snapped. My head smacked the ground and my eyes popped open – directly next to a pile of washed up rubbish. The trash refused to be ignored.

I got back onto my scooter and headed further down the coast. Then I noticed something else. For every stretch of deserted, less-trash-y-than-in-town-beach, was a giant billboard illustrating a soon-to-be built resort. I lost count of the number of high-rises destined for the shore. 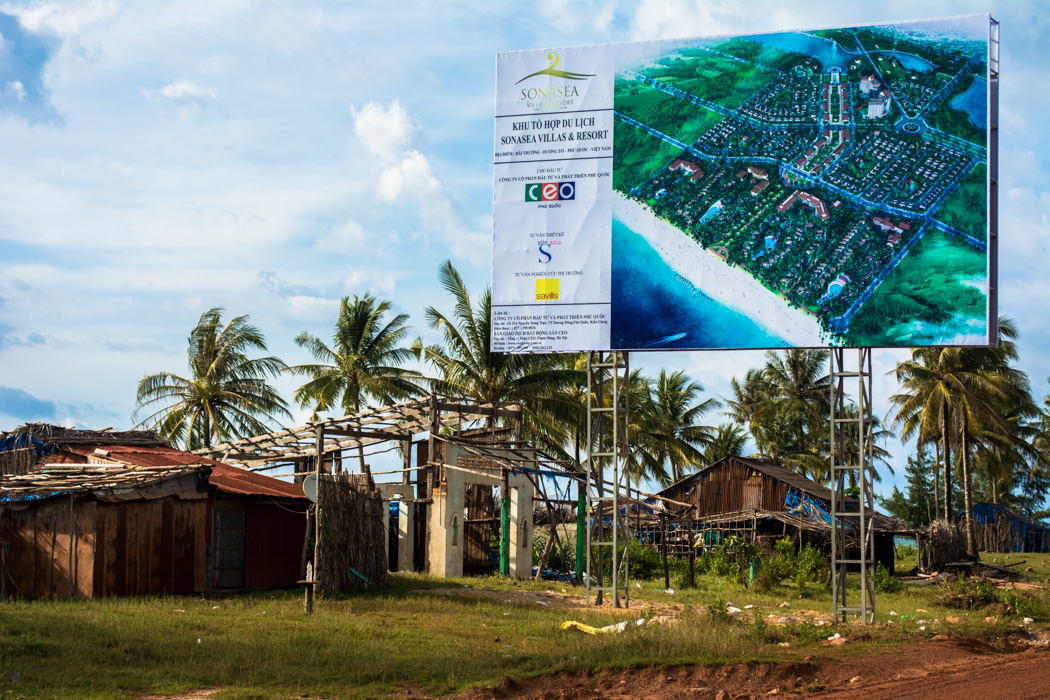 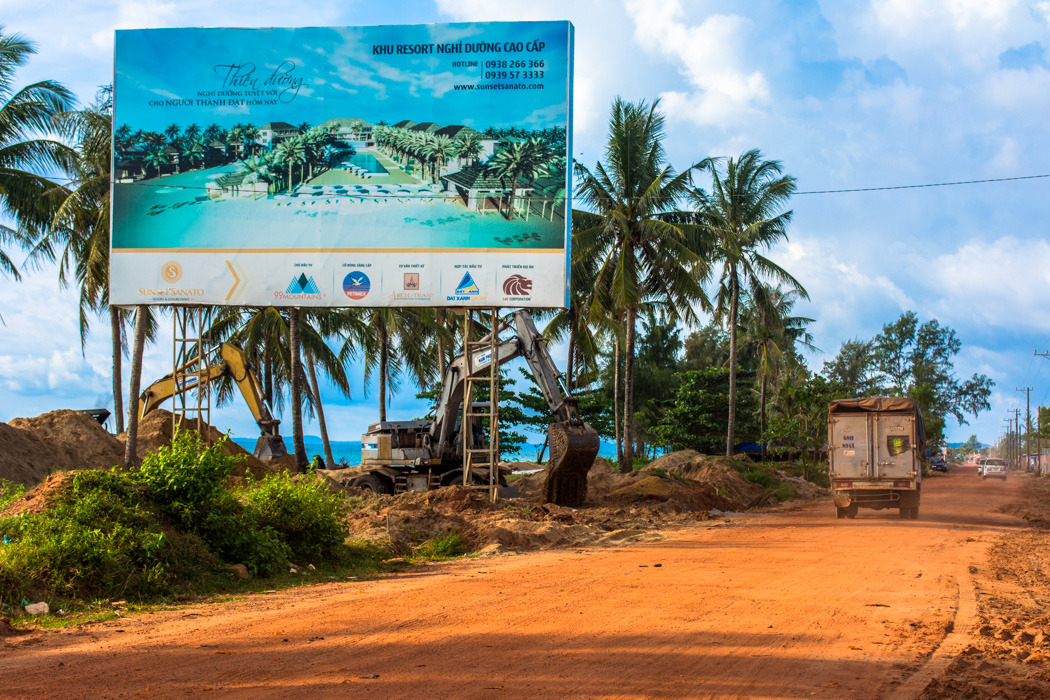 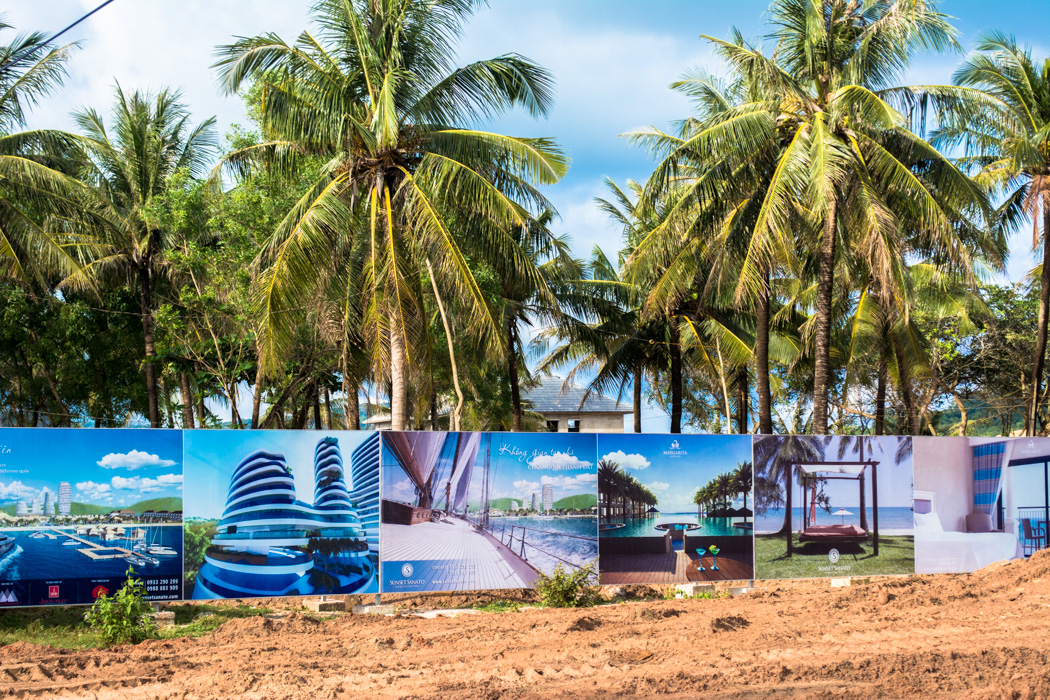 In three years, you’d no longer be able to see the ocean from the road. In three years, none of these houses would be here –there were miles of highway being paved right across the front yards of the villages. 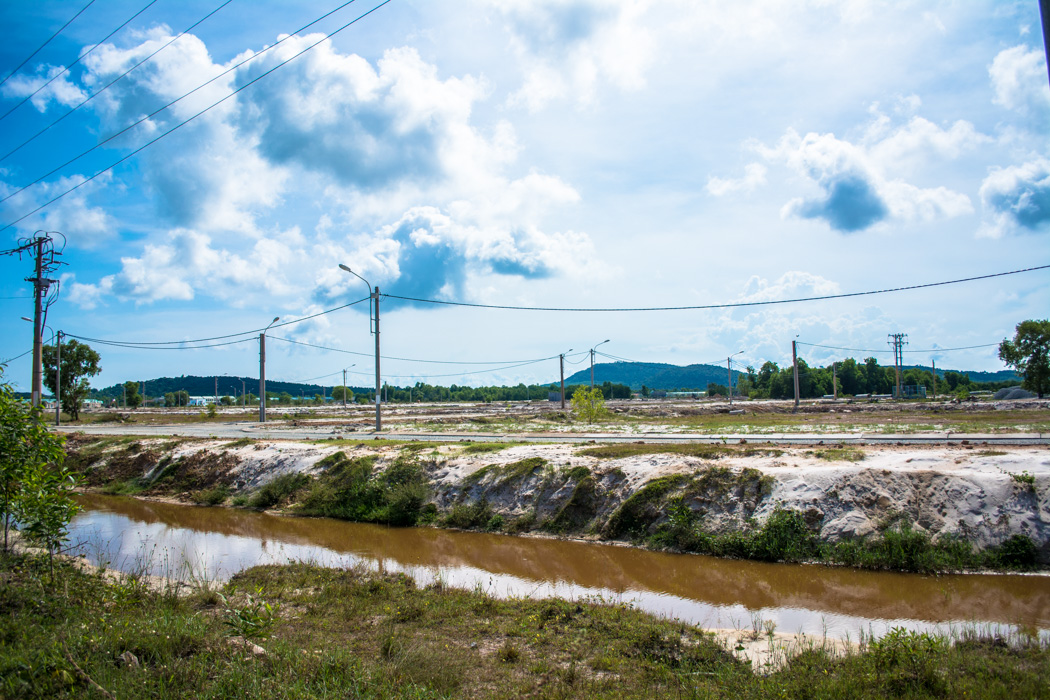 As I drove past the palm tree-framed landfills and construction sites, I couldn’t decide what was more depressing about Phu Quoc – the damage we’ve already done or the damage we’ve promised to do. 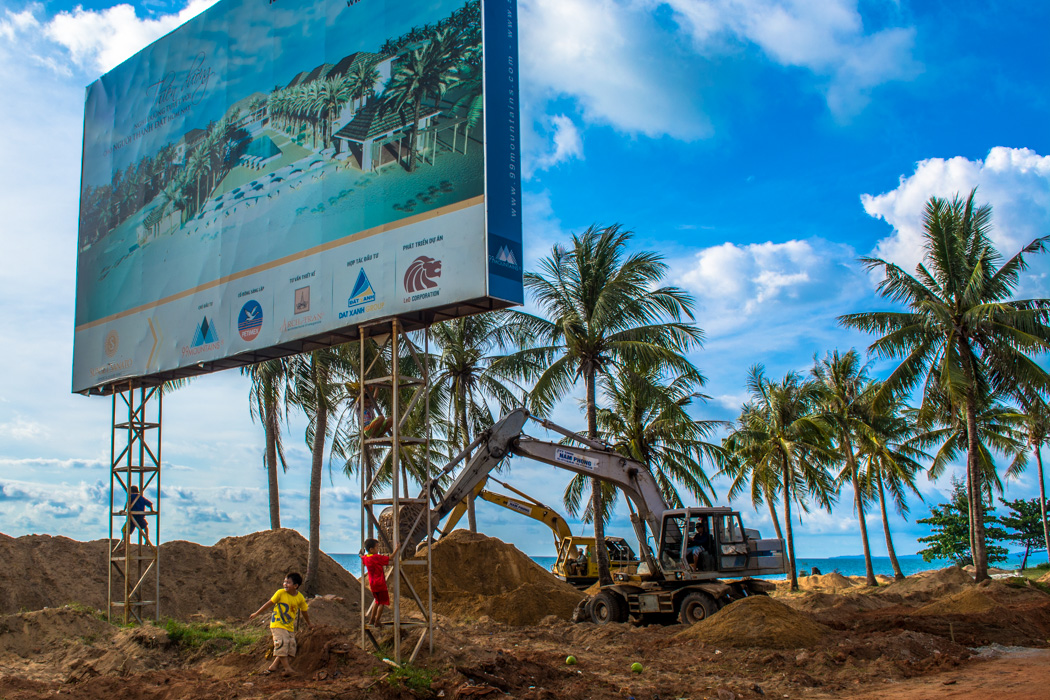