Great things to do on Phu Quoc

Posted by : AHA Thứ Tư, 6 tháng 4, 2016
Things to do on Phu Quoc are as numerous and varied as the people who come here. It seems like every twist and turn on the back roads offer new attractions. I love this place. Phu Quoc beaches were on my mind when I woke up really early; a combination of fresh air and a clear head I suppose. It was still dark when I stumbled from my slumbers and there was exploration to be done. I had planned out a route that would take me to some of the really great beach areas on the island. However, what was on my mind at 6.00am and what I ended up doing were two entirely different things.
Riding a motorbike on the island sone of the best things to do on Phu Quoc, it’s a really pleasant experience. I would however, add a footnote that really inexperienced riders might struggle. The main roads have trucks whizzing past at unsuitable speeds and some of the tiny, sandy tracks need a bit of getting used to. Balancing is not easy if you are not used to riding. Always make sure your left hand mirror in particular is well trained on the road behind. The trucks and buses do generally honk their horns to announce their presence, but it’s better to be forewarned, than startled whilst a couple of feet away from turning truck wheels.

I set off in search of the the north eastern “scenic route” which is marked on most maps. Its a great drive with stunning ocean vistas just about all the way. Within 15 minutes of my hotel I was on it. Well when I saw on it, I wasn’t sure at first. They are building a new bridge and the start of the route isn’t the most welcoming sight that has ever greeted me. 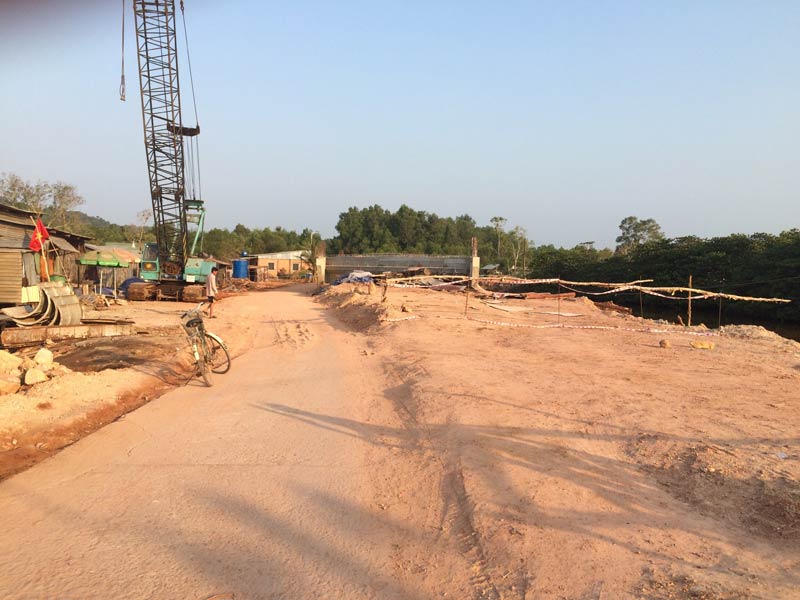 Welcome to the Scenic Route
Bai Vung Bau (Vung Bau Beach)
The first beach I came across was Vung Bau, no more than a tablecloth sized spit of sand with gorgeous water. A few resorts have been crammed onto the edges. The smaller Bamboo Cottages are cute and worth a look, the much more upmarket Vung Bau Resort somewhat dominates. I called at at the Wild Beach Resort for breakfast but the scarcest breakfast menu I have ever seen left me with a Caphe Da and nothing else. Bread and butter for VND59,000, I mean really? 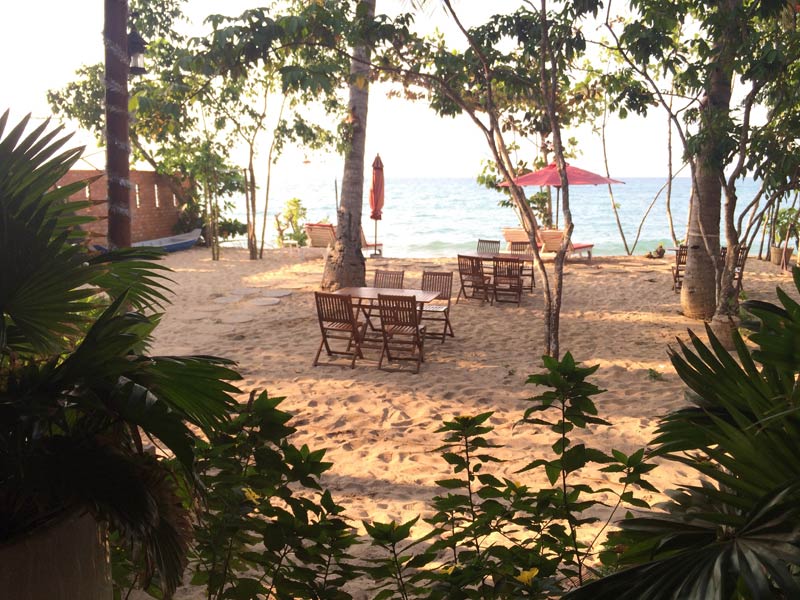 Continuing on, the coastal road, takes tourists round the back of the soon to be developed giant resorts and the already completed Vinpearl Land Amusement Park. This would be a quite spectacular road, terrific on a motor bike. However it is now closed as the giant resort developments get underway. Traffic has to make a right turn along a newly built and seriously rough gravel road, back on to the main drag by the new Grand World development. This was a major disappointment as I had been told that the scenic route was one of the best things to do on Phoc Quoc, on a motorbike. As I had covered all this route yesterday. A rethink was in order.

Duong Dong is one of the best things to do on Phu Quoc
I decided to switch back completely and take a look at the main town on the island, Duong Dong. First glance was not encouraging as the main route through is just a collection of tired looking businesses and shops. However a quick meander off to the right, brought me to the wildest and most difficult to navigate street market I have ever seen. My hired motorbike stalled as soon as I came off the gas, and with everything moving at less than walking pace it was a difficult balancing act between throttle and brakes. I must have worn through a set of brakes in the 20 minutes it took me to go about half a kilometre. 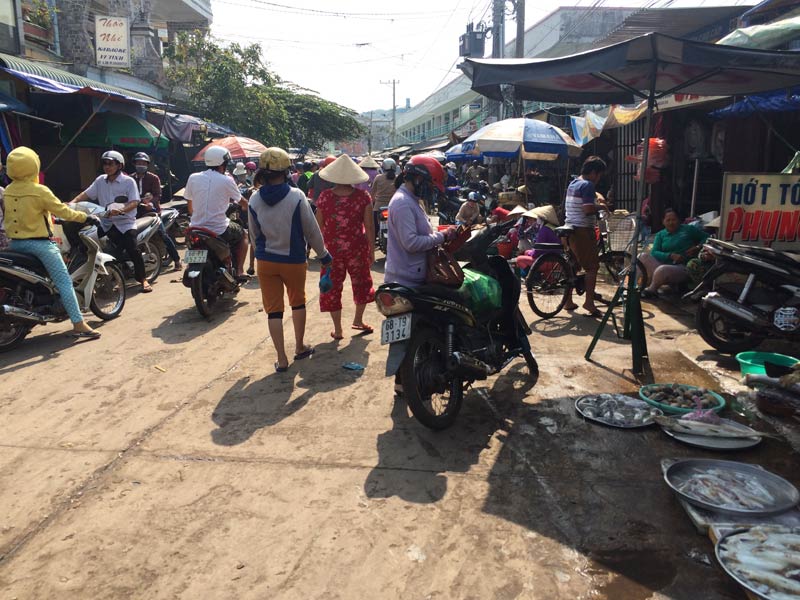 Once clear of the market I followed the road round and came upon the harbour. I loved this, the boats bobbing around in the water, people strolling along taking the air and people going about their business. At last another real piece of the island and one of the truly great things to do on Phu Quoc. 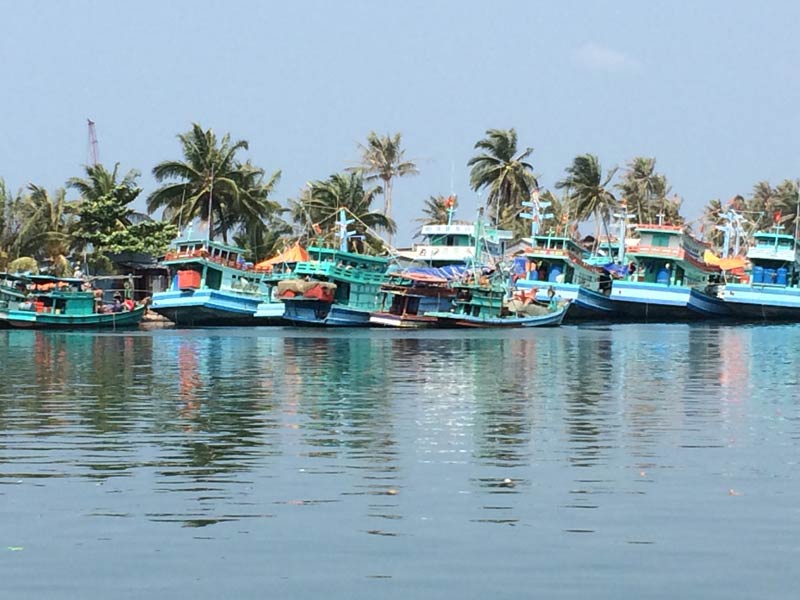 I paused for a while and soaked it all in, then spotted a small ice cream, parlour and cafe called Buddy’s. A perfect spot for breakfast. It was only 10.00am and I had done over 100 km (62 miles) already.

After breakfast I rode round to the river and came across so much of interest that I made a snap decision, I could go back to my dreary accommodation in the hills and check out; so I did. A few hours later, I had checked into a guest house, showered and was raring to go again. My new room did not have random wild life, it had hot water, soap and even shampoo, my God, from the living dead to the land of the living in a few short hours, isn’t life wonderful.

I went for a walk and stumbled upon what was clearly a Cao Dai temple in the same street as my accommodation. The Thanh That Temple is really quite odd, its entrance door also carries the legend “Tor Tranh Tay Ninh”; clearly a reference to the main Cao Dai temple in Tay Ninh, Ho Chi Minh City. There is not much written about it and the solitary old lady monk who was banging the temple gong didn’t have a word of English. A bit of research eventually turned up the fact that it was consecrated in 2008. It is painted as if by Picasso on acid, as is the want of Cao Dai adherents.

The weird and wonderful Thanh That Temple

I spent a few moments then walked into the next street to be greeted by a long row of bars and restaurants, gearing up for the evenings activities. These are apparently new restaurants next to the river and the fishing boats moored here afforded some nice photo opportunities. It was time to find a restaurant, have a rest and see what other excellent things to do on Phu Quoc I could find.

A mosaic of fishing boats

Following a highly successful 25-year career as a singer/songwriter and musician, Keith pulled out of the rat race and moved to Southeast Asia in 2008. First living in Thailand, he moved to Cambodia and then relocated to Ho Chi Minh City in early 2013. Keith has had work published in magazines and websites in the UK, Europe, USA, Australia and Asia. He has written for the BBC and has appeared on TV and radio in many different countries. His great loves are music and travel, but he writes on a whole range of subjects.
Tags : Welcome to Phu Quoc
Share This :