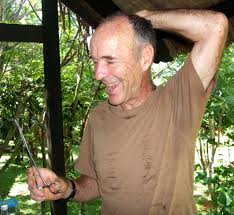 Dr. Professor Abercrombie had a bright green snake attached to his finger. He calmly gripped the slender reptile by its neck, coaxing out its inward curving teeth. I offered him a wad of tissue to soak up the red ooze dripping off the tip of his index finger. The cheerful professor and his fellow herpetologists had been rambling about Phu Quoc Island, on a mission to update an inventory of the island's reptiles and amphibians, accompanied by Nguyen Vu Khoi, CEO of Wildlife At Risk, based in Saigon. 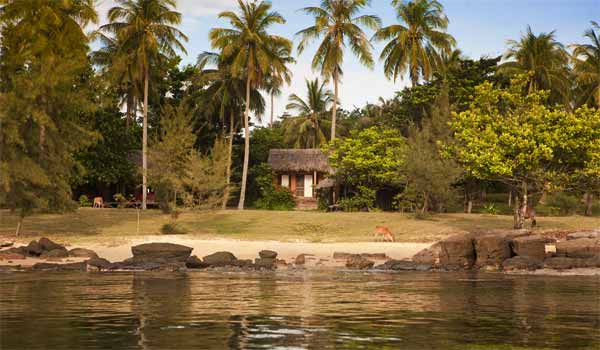 A large bungalow at Mango Bay Eco-Resort, serving as a specimen holding center, soon filled up with delightful creatures that included a pair of flying lizards (Drago sp.), apparently a species new to the island, a rarely sighted Olive Tree Skink and a slimy Banna Caecilian that resembled a cross between a snake and an eel.

If the specimens were interesting, I found the people collecting them just as fascinating. They seemed to attract a host of creatures, as if these could sense that the team's work would contribute to conservation efforts for their survival. It was probably just that these avid collectors had honed their specimen finding skills and knew where and when to look... besides a good dose of providence working in their favor.

Some members of the team were rather accomplished at wildlife illustrations. At a table, Dao Vang Hoang meticulously rendered an inked illustration of the reticulated scales of a Python coiled up snugly in a white cloth bag next to him. Another artistic herpetologist spread out the retractable flaps (wings) of a gliding lizard(Draco sp.) for a color pencil drawing. I saw him work late into the night by candlelight as the specimens had to be released the next day. 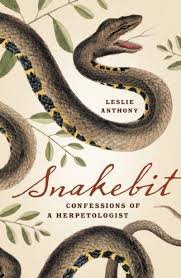 In the bright sunny morning, as the team walked across a grassy patch after breakfast, a tiny poisonous krait slid right in front of one big pair of boots. The booted herpetologist gently pinned the squirming reptile down under his soles to cries of "Carefull, don't hurt it!" They oohed and aahed as they figured out how to get hold of the krait without getting bitten. Dr Abercrombie resolved that with his trusty pair of tweezers.

Sometime later, someone was heard thinking aloud "Where has that Krait gone (missing)?" They were a pretty hilarious bunch although I imagine it wouldn't be funny to find a krait under your pillow. The banded krait was called "the two step snake" by American soldiers during the Vietnam war, apparently because once bitten, you would die after taking two steps. On the very same day that hijacked airliners crashed into the Twin Towers in New York City - September 11th 2001 - the American herpetologist Joseph Slowinski had been bitten by a krait in the remote jungles of Myanmar and died about 30 hours later.

That night, after some rain the frogs were out in full orchestral splendor as the team went about with torches. Even ordinary coarse skinned toads were handed complimentary verbal evaluations. Besides the frogs and toads a chameleon was found sleeping on its leafy hammock but the prize specimen captured that night was a horned lizard (Acanthosaurus sp.). I photographed it with its head sticking out of the palm of a hand for scale and was surprised it made no attempt to scamper off when placed on a rock. Perhaps it had been dazzled by the flash of our cameras.

On the day of my departure, they let the docile python out of the bag. It was about a couple of meters long and did not seem in hurry to go anywhere as it was coaxed to uncoil to its full shimmering iridescent, reticulated splendor. 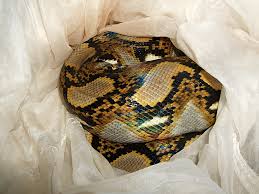 WILDLIFE AT RISK is a NGO based in Ho Chi Minh City. Its mission is the long-term conservation of Vietnam’s threatened biodiversity.
Tags : Welcome to Phu Quoc
Share This :