When we first rented a moped to navigate the hectic streets of Saigon, we were told we would definitely crash at some point. Friends and colleagues shared their stories of jumping off bikes to avoid head on collisions - it hardly instilled us with confidence. In a city with more than nine million people and six million mopeds, and a complete lack of any sensible traffic laws, I suppose it’s an inevitability waiting to happen.

But after five months of commuting all over Saigon we had survived without a scrape - thanks to Ryan’s unwavering focus. Unlike me, he’s not a day dreamer, had never had an accident driving back home and is completely immune to road rage, so I begrudgingly accepted it made more sense, generally, for him to drive our moped.

On the paradise island of Phu Quoc - Vietnam’s largest island - it was a different story. We had two days off work for Christmas and wanted to make the most of exploring back-road tracks, deserted white-sand beaches and tropical jungle. And we did, until I put a pretty definite stop to it.

The views on our 40 minute flight to Phu Quoc from our home in Can Tho were absolutely stunning. It’s a Never-Never Land island where azure blue ocean teems with weird and wonderful marine life, colourful fishing boats lull across gentle waves and palm trees line pristine coastline. 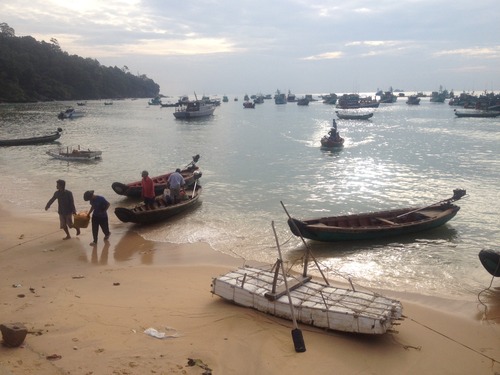 We collected a rental moped at the airport on Christmas Eve and headed past the tourist strip to Chez Carole, a boutique, eco-friendly beach resort on Cua Can beach. Nestled among bamboo trees and tropical plants, it was a charming Christmas hideout offering complete serenity. 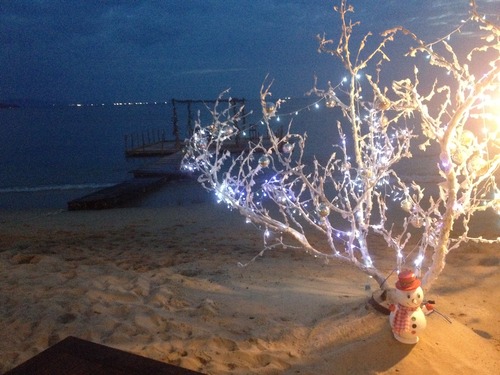 Hours later we were cruising down remote roads in the north of the island, past bustling fishing villages and men swinging in hammocks. The scenery was incredible from the back of the moped but I was itching to get in the drivers seat. The tarmac road only lasted so long though and soon I was driving us along dirt roads covered in thick orange sand. Hidden bumps were difficult to spot, the moped was heavy to maneuver and darkness was looming. I was out of my depth and knew it was time to swap drivers. Then bam! We hit the dust hard.

I was winded. Ryan had been thrown on top of me. His eyes reflected mine, it was a moment of complete confusion. A million feelings of guilt, shock and pain rushed through my mind. Luckily the moped had rolled the other way. Tears stung my eyes, was Ryan OK? He stood up slowly, piecing together what had just happened. My breath returned and I lay on the ground looking at the shredded skin on my arm, hands, foot and knee. 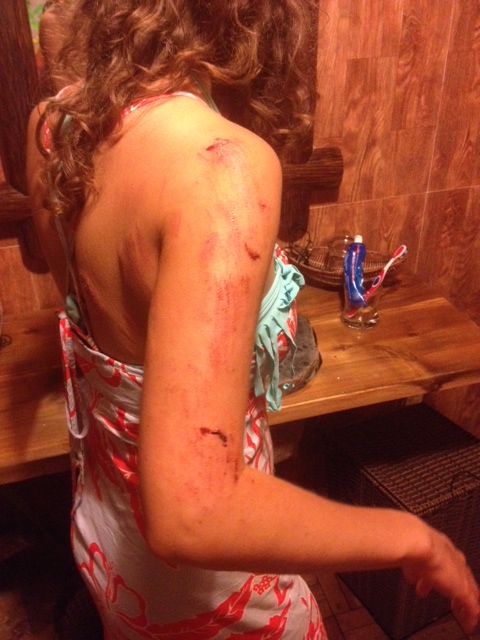 We had hit a huge bump, our belongings lay scattered on the sand. We soon realised it could have been a lot worse. Then Ryan tried to start the bike and a cruel silence surrounded us. We were in the middle of nowhere, I couldn’t walk, Ryan was bleeding and it was getting dark.

A Vietnamese man passed on his moped, stopping to look at the damage. We spoke in our own languages, using gestures but neither understanding the other. He reeled off numbers in Vietnamese, looked at the dusty bike but didn’t do much to help. Whether he was proposing a fee we’ll never know as the bike suddenly made a beautiful sound as the engine spluttered back to life. He walked off disgruntled. 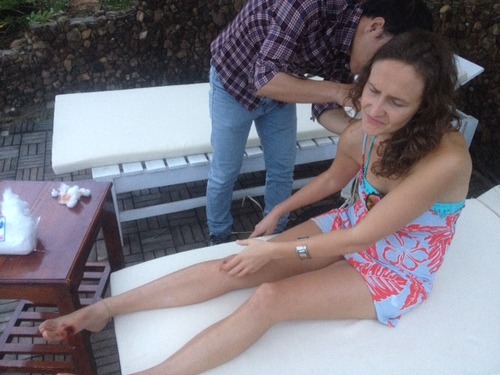 Forty minutes later we were back at our hotel. A kind Vietnamese waiter sat us on loungers by the pool as he carefully cleaned the sand and gravel out of our cuts, wrapped us in bandages and helped us back to our room. It was a pretty sudden turn of events, not quite the Christmas we had planned but we certainly made the most of our posh hotel, unable to venture any further. Ryan gave me a piggy back to the restaurant for lunch on Christmas Day and we sat by the pool, embracing the festive spirit in our Santa hats

The next morning, a dramatic Vietnam Airlines official told me I couldn’t fly back to Can Tho unless I could bend my leg. I was sitting in a wheelchair forcing my knee to bend when another suggested they put me on a stretcher. Struggling to hold in our laughter, we assured them two seats would suffice - I was hardly on my death bed. They winched me onto the plane in the wheelchair like some sort of beached whale. It was a surreal experience, but we made it back to Can Tho in one piece, slightly battered, slightly bruised and in no hurry to jump on our moped. 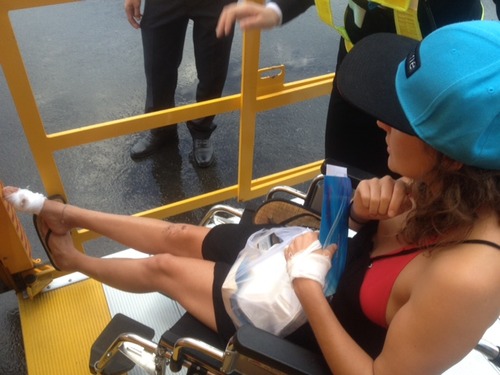 A week later I could walk properly again and returned to work. We are now far more aware of the dangers of two-wheeled travel in Vietnam, but Ryan is unlikely to ever trust my driving again.


By Lucy -http://thechallengingroad.tumblr.com/
Tags : Welcome to Phu Quoc
Share This :