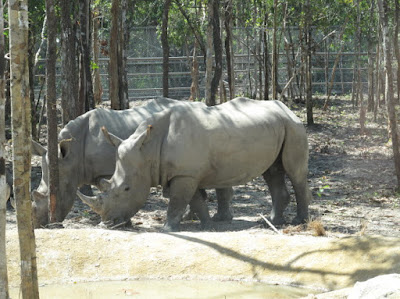 In its report, released yesterday, the department said no endangered and precious animal such as lions, tigers, leopards and rhinos had died there.

Fifty-six of these species were imported (25 have been given the CITES certificate) and 48 were sourced locally.

The animals are being fed and taken care of under the management of the zoo, in compliance with regulations.

There are 14 rhinos from My Quynh Zoo in the southern Long An Province. Safari Phu Quoc Vinpearl was completing procedures to import rhinos from abroad in accordance with Vietnamese laws and strict wildlife regulations, the report said.

As reported previously on social media, Vingroup, the investor of Vinpearl Safari Phu Quoc, has denied reports that it has caused the deaths of thousands of rare birds and animals in the newly opened park.

The department said these animals had died due to lengthy transportation procedures and their inability to adapt to the new environment and climate, adding that there was no sign of the animals' deaths having been caused due to disease. The carcasses have been dealt with in accordance with regulations.

According to a Vingroup press release, within two months of the opening of the park under its management, the animals have become familiar with the new habitat and are in good health, adding that several species have even given birth.

The company said 135 small monkeys, which are inhabitants of Phu Quoc Island and weigh about 150gm to 200gm each, had escaped because the cages they had been put in were designed for larger animals. — VNS
Tags : Welcome to Phu Quoc
Share This :