Posted by : AHA Thứ Tư, 30 tháng 3, 2016
Phú Quốc is the largest island in Vietnam. Phú Quốc and nearby islands, along with distant Thổ Chu Islands, is part of Kiên Giang Province as Phú Quốc District, the district has a total area of 574 square kilometres (222 sq mi) and a permanent population of approximately 103,000. Located in the Gulf of Thailand, the district of Phú Quốc includes the island proper and 21 smaller islets. The district seat, Dương Đông, is located on the west coast, and is also the largest town on the island. The economy is centered on fishing, agriculture and a fast-growing tourism sector.

From March 2014, Vietnam allows all foreign tourists to visit Phú Quốc visa-free for a period of up to 30 days.

Phú Quốc lies south of the Cambodian coast, west of Kampot, and 40 km west of Ha Tien, the nearest coastal town in Vietnam. Roughly triangular in shape the island is 50 kilometres (31 miles) long from north to south and 25 kilometres (16 mi) from east to west in the north at its widest. It is also located 62 nautical miles (115 km; 71 miles) from Rạch Giá and nearly 290 nautical miles (540 km; 330 mi) from Laem Chabang, Thailand.

A mountainous ridge known as "99 Peaks" runs the length of Phú Quốc, with Chúa Mountain being the tallest at 603 metres (1,978 ft).

Phu Quoc is famous for its two traditional products: fish sauce and black pepper. The rich fishing grounds offshore provides the anchovy catch from which the prized sauce is made. Pepper cultivation is located inland in the center of the island. More recently a pearl farm was established. 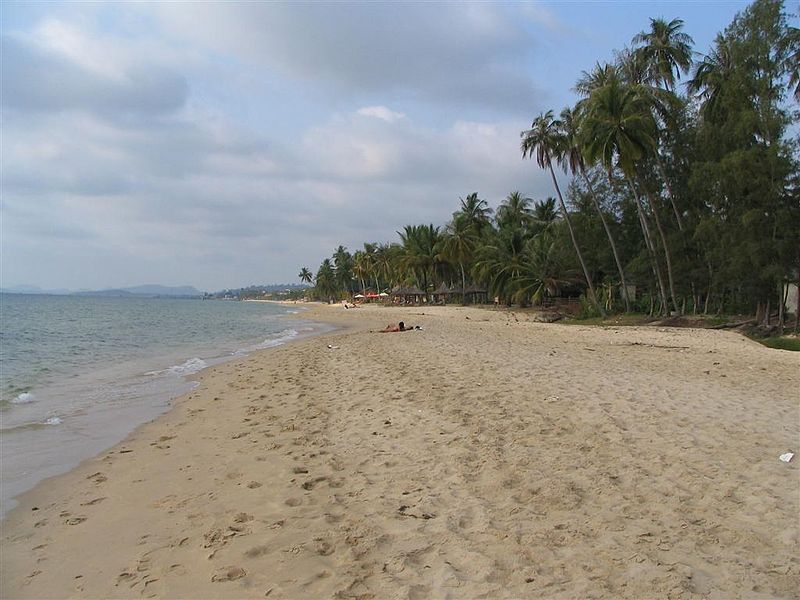 Air Mekong has its headquarters in An Thoi, Phú Quốc.

With the opening of the new Vinmec Phu Quoc International Hospital in June 2015, Phu Quoc will add an additional source of revenue to the local economy in terms of medical services, medical tourism, and medical education.

History
In the area of Dương Đông town market

Phu Quoc has been a sleepy historical backwater for most of its history. However, in the 20th century, it was involved in a series of high-profile events: 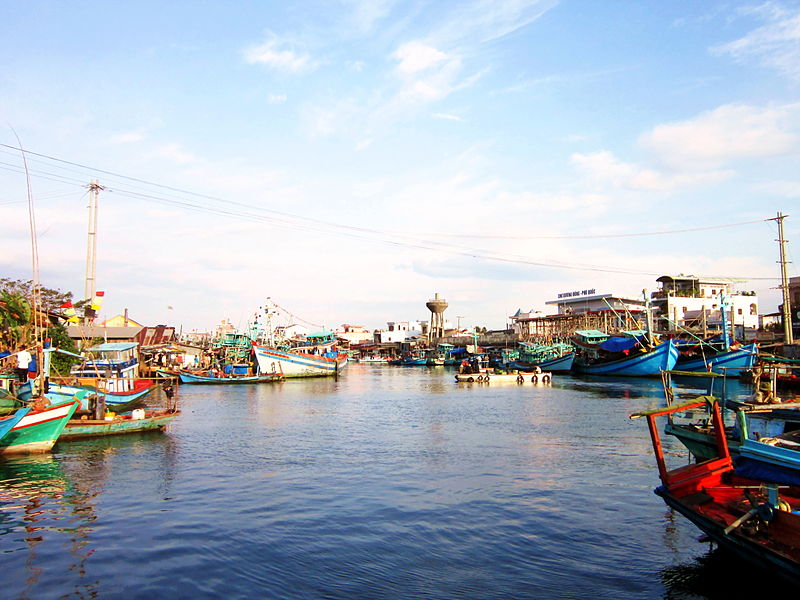 The French missionary Pigneau de Behaine used the island as a base during the 1760s and 1780s to shelter Nguyễn Ánh who was hunted by the Tây Sơn army.

An 1856 record mentions the island: "... King Ang Duong (of Cambodia) apprise Mr. de Montigny, French envoy in visit to Bangkok, through the intermediary of Bishop Miche, his intention to yield Phu Quoc to France. Such a proposition aimed to create a military alliance with France to avoid the threat of Vietnam on Cambodia. The proposal did not receive an answer from the French.

While the war between Vietnam, France, and Spain was about to begin, Ang Duong sent another letter, dated November 25, 1856, to Napoleon III to warn him on Cambodian claims on the lower Cochinchina region: the Cambodian king listed provinces and islands, including Koh Trol កោះត្រល់ (Phú Quốc), being parts of Vietnam for several years or decades (in the case of Saigon, some 200 years according to this letter). Ang Duong asked the French emperor to not annex any part of these territories because, as he wrote, despite this relatively long Vietnamese rule, they remained Cambodian lands. In 1867, Phu Quoc's Vietnamese authorities pledged allegiance to French troops just conquering Hà Tiên.

In 1939, the Governor-general of French Indochina, Jules Brévié drew a line to delimit the administrative boundaries for islands in the Gulf of Thailand: those north of the line were placed under Cambodia protectorate; those south of the line were managed by the colony of Cochinchina. Brévié made the point that the decision merely addressed administrative task, and that no sovereignty decision had been made.As a result, Phu Quoc remains under Cochinchina administration. Later, Cochinchina's sovereignty was handed over to the State of Vietnam and remained so after France left.

After Mainland China fell under the control of the Chinese Communist Party in 1949, General Huang Chieh moved 33,000+ Republic of China Army soldiers mostly from Hunan Province to Vietnam and they were stationed at Phu Quoc. Later, the army moved to Taiwan in June 1953.

On May 1, 1975, a squad of Khmer Rouge soldiers raided and took Phu Quoc, but Vietnam soon recaptured it. This was to be the first of a series of incursions and counter-incursions that would escalate to the Cambodian–Vietnamese War in 1979. Cambodia dropped its claims to Phu Quoc in 1976. But the bone of contention involving the island between the governments of the two countries continued, as both have an historical claim to it and the surrounding waters. A July 1982 agreement between Vietnam and The People's Republic of Kampuchea ostensibly settled the dispute, but since Vietnam's withdrawal from Cambodia, the agreement has not been recognized and the island is still the object of irredentist sentiments. The opposition Cambodian National Rescue Party still claims the island as Cambodian territory.

The island's monsoonal sub-equatorial climate is characterized by distinct rainy (June to November) and dry seasons (December to May). The annual rainfall is high, averaging 2,879 millimetres (9.446 ft). In the northern mountains up to 4,000 millimetres (13 ft) has been recorded. April and May are the hottest months, with temperature reaching 35 °C (95 °F).
Tags : Welcome to Phu Quoc
Share This :