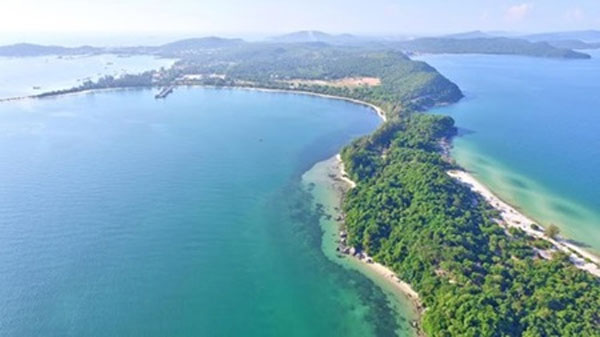 Bui Ngoc Suong, a former chairman of the Kien Giang Province People's Committee and now chairman of the Viet Nam Tourism Property Association, said Phu Quoc has seen big changes since a master plan for the development of the island was approved by the Government in 2004, making it more attractive to tourists and investors from around the world.

Major changes on the island include a road networks that runs around and through Phu Quoc, the connection of the island with the national power grid, the construction and upgrades of ports and airports, especially an international airport.

Big investments from Vingroup and Sungroup have livened up the island's investment environment together with a long list of other big investors like LDG Group, CEO Group, and Bim Group.

Vingroup is building the Vinpearl Phu Quoc resort complex on 300 hectares in Ganh Dau Commune. The first phase of the project was put into operation at the end of last year, while the second phase was commissioned last October and work on the third is underway.

Sungroup is speeding up work on big resorts like J.W Mariott, Premier Village Phu Quoc, and Sebel Phu Quoc along with a water sports complex on Hon Thom (Thom Islet) and a cable car connecting it with An Thoi Town.

The island's dynamic growth accelerated in late 2012 following the inauguration of Phu Quoc International Airport. The airport has received a fresh infusion of over VND1 trillion (US$45 million) to increase its capacity from 2.5 million passengers a year to 4 million by 2017.

After only one year from 2012, the number of tourists to the island doubled that of the previous year, reaching nearly 700,000.

Suong said of the nearly 200 projects licensed, most are by local groups, adding, "I believe other big investors will come to Phu Quoc."

According to figures from the Kien Giang Department of Planning and Investment, provincial authorities have licensed 164 investment projects with a combined registered capital of over VND183.1 trillion ($8.17 billion).

These include 21 fully foreign-invested ones.

Twenty three projects are under construction while 24 others have become operational. The latter include some major projects like the five-star resort complex Vinpearl Land Phu Quoc and the Phu Quoc Safari projects.

Authorities have cancelled some 100 projects due to delays and lack of capacity, including 15 last year.

Than Thanh Vu, president of Sao Khue Trade and Investment Promotion JSC, the main sponsor, said the forum offered local and foreign investors an opportunity for a face-to-face dialogue with local authorities.

In the first two weeks of 2016 the HCM City Export Processing Zone Authority (HEPZA) has licensed two FDI projects with a combined registered capital of over $30 million.

They include a $25.6 million joint venture between Saigon Co.op and Singapore's Wilmar International Limited to produce sauces for local consumption and exports to be set up at the Hiep Phuoc Industrial Park in Nha Be District.

A spokesman for the Singaporean partner said the plant would help exploit the strengths of the two partners, making their products more competitive and helping develop the country's sauces and spices industry.

The other is a project by Nippon Paper Viet Hoa My, a joint venture between Japanese and Vietnamese companies to be located at the Tan Phu Trung Industrial Park.

The $4.4 million plant will manufacture high-quality paper cups, bowls, and trays for domestic consumption as well as export.

According to HEPZA, this year the hi-tech park targets total FDI of $700 million, with priority given to technology and supporting industries and four other major sectors — manufacturing, electronics – IT, chemicals – rubber – plastics, and food and foodstuff processing.

HEPZA said many textile and garment, electronics and supporting-industry companies based in HCM City industrial parks have plans to expand investment and production to take the opportunities arising from bilateral and multilateral trade agreements signed or to be signed by Viet Nam.

"These are signs indicating that FDI flows into HCM City will increase sharply this year," a HEPZA spokesman said.

The central city of Da Nang will become the first locality in Viet Nam to allow international cruise ships to keep open their casinos and duty-free shops starting in mid-January.

Deputy director of the city Department of Culture, Sports and Tourism, Tran Chi Cuong, said his department has consulted with city authorities and pored over the country's laws before making the decision.

"We have looked into all relevant regulations and found there are no provisions banning foreign ships from offering the services on board to their passengers while anchored in Vietnamese waters.

"Therefore, such services should be allowed for cruise tourists to help attract more international cruise ships to the country."

With tourist destinations in the country yet to provide such facilities, those on board cruise ships would help entertain cruise visitors, he added.

SuperStar Libra, operated by Star Cruises, is expected to become the first cruise ship to benefit from the city's move. Tourists aboard the vessel stay overnight in Da Nang rather than make a day trip.

For the past couple of years representatives of foreign cruise lines have been repeatedly asking the Ministry of Culture, Sports and Tourism, the Viet Nam National Administration of Tourism, and provincial authorities to allow them to keep casinos, bars, and souvenir shops open on board their cruise ships.

The representatives said these are sorely needed since many passengers do not want to disembark and go on local tours. The services also provide an additional source of income for the cruise lines while local authorities do not need to worry about local residents getting on board to gamble.

Vietnamese nationals who are not passengers are not permitted to board the vessels or enter the casinos, they said.

In preparation for a plan to organise hundreds of cruise voyages to Viet Nam in 2015-17, executives of Star Cruises have met officials of VNAT, Quang Ninh Province, and Da Nang and sought sanction to keep the casinos and duty-free shops on board their vessels open.

But no other locality apart from Da Nang has agreed though.

The department has high hopes that more international travellers will visit Da Nang this year, especially aboard cruise vessels.

"Star Cruises alone will bring to the city around 110 cruise ships this year with thousands of passengers and crew on board each," Cuong said.