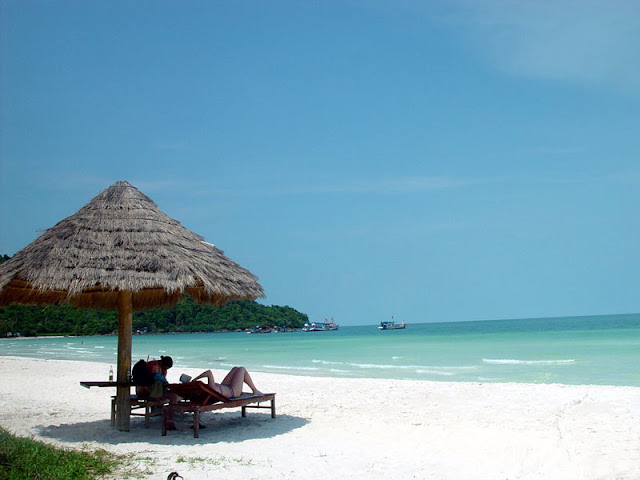 Fringed with white-sand beaches and with large tracts still cloaked in dense, tropical jungle, Phu Quoc rapidly morphed from a sleepy island backwater to a must-visit beach escape for Western expats and sun-seeking tourists.
Beyond the resorts lining Long Beach and development beginning on the east coast, there's still ample room for exploration and escaping. Dive the reefs, kayak in the bays, eat up the back-road miles on a motorbike, or just lounge on the beach, indulge in a massage and dine on fresh seafood.

The tear-shaped island lies in the Gulf of Thailand, 45km west of Ha Tien and 15km south of the coast of Cambodia. It's no lightweight: at 48km long (with an area of 574 sq km), Phu Quoc is Vietnam’s largest island – about the same size as Singapore. It's also politically contentious: Phu Quoc is claimed by Cambodia who call it Koh Tral and this explains why the Vietnamese have built a substantial military base covering much of the northern end of the island. It was only granted to Vietnam by the French in 1949, as part of the formal annexation of the Mekong Delta.

Phu Quoc is not really part of the Mekong Delta and doesn’t share the delta’s extraordinary ability to produce rice. The most valuable crop is black pepper, but the islanders here have traditionally earned their living from the sea. Phu Quoc is also famed across Vietnam for its production of high-quality fish sauce (nuoc mam).

Despite development (a new international airport, a golf course, new roads and a planned 'casino eco-tourism resort project'), much of this island is still protected since becoming a national park in 2001. Phu Quoc National Park covers close to 70% of the island, an area of 31,422 hectares.

Phu Quoc’s rainy season darkens skies from late May to October, when the sea gets rough and a lot of diving stops. The peak season for tourism is midwinter (December and January), when the sky is blue and the sea is calm, but it can get pretty damn hot around April and May.
Tags : Welcome to Phu Quoc
Share This :