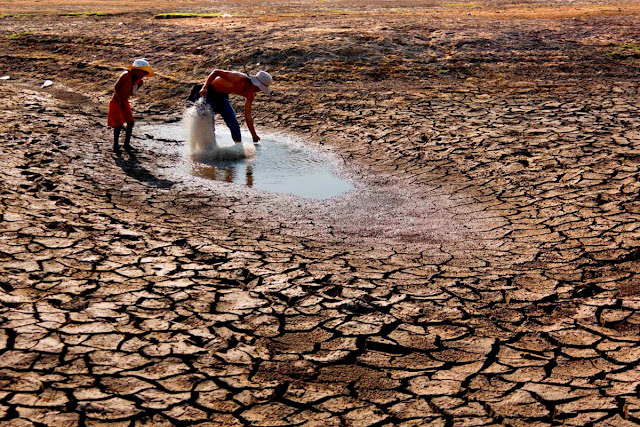 Government officials met in Can Tho last Wednesday to discuss the currently dire state of the Mekong’s farmlands, where not only a shortage of freshwater but also the salinization of water sources in the region are having a serious impact on local residents.

According to Agriculture Ministery Cao Duc Phat, the Delta region’s rainfall has dropped 20-50%, bringing water levels to the lowest in decades. This dry weather is in part due to El Nino’s lingering effects, however the region is also severely affected by climate change and dam construction on the Mekong River, both of which are working against local farmers and their crops.

This year, the Delta’s now-annual salinization problem has arrived two months earlier than expected, creeping up to 93 kilometers inland along the region’s major rivers. According to VietnamNet, this is 10-15 kilometers further than previously recorded. This spells danger not only in the immediate region but also further afield: the Mekong Delta is responsible for over half of the country’s rice production in addition to 70% of its seafood and fruit supplies.

As a result, nearly one-third of the Mekong’s winter-spring crops are in danger. Both Vinh Long and Can Tho are experiencing their first-ever bout of salinization, while coastal provinces are likely to bear the brunt of this issue for several months. In coastal Kien Giang province, farmers have lost 34,000 hectares of rice, the highest in the Delta, and local officials are enacting projects to dredge canals, build temporary dams and close sluice gates in an effort to stem the flow of saltwater into the region.

For the moment, officials are discussing short-term solutions such as irrigation projects to bring freshwater to Delta farmers, as well as long-term efforts to boost cooperation between Vietnam and its neighbors who are also adversely affected by climate change. Last Wednesday, Deputy Prime Minister Nguyen Xuan Phuc committed VND2.3 trillion from the national government to assist the Mekong in combatting drought and salinization, however additional funding will be necessary in order to construct the necessary sluice gates and irrigation projects to protect Delta farmers.

However, while drought can present an immediate hardship for farmers, Hau Giang province Party Secretary Tran Cong Chanh pointed out that salinization poses a greater threat, as its effects can linger for up to a decade after the fact.