Posted by : AHA Thứ Bảy, 26 tháng 3, 2016
Phu Quoc Island, dubbed the Pearl Island, in the southern province of Kien Giang expects to see a new boost to its socio-economic development with the planned launch on November 1 of two international air routes connecting the island and Singapore and Cambodia’s Siem Reap. 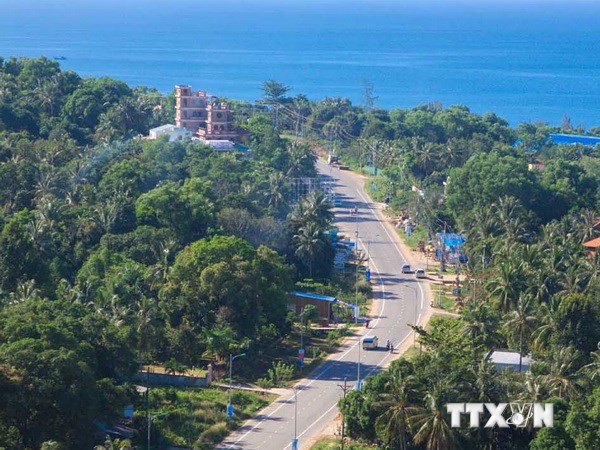 In line with the plan to turn Phu Quoc into a special administrative-economic zone and an international tourism hub, various key infrastructure projects are underway on the island.

The island is now connected to the national electricity grid. A road system around the island is also about to be completed, thus helping facilitate the travel of locals and tourists.

Vice Chairman of Phu Quoc People’s Committee Huynh Quang Hung said many tourism projects, including several upscale hotels and resorts, are being implemented on schedule, while a number of international groups have also come to survey the business environment on the island.

According to Phu Quoc Island’s investment and development management board, the island has to date licensed 112 investment projects. They cover 4,850 hectares of land with the total capital of more than 135 trillion VND (6.43 billion USD).

As of now, 18 projects worth 6.85 trillion VND have begun operating, contributing importantly to the rapid development of the island.

Located on the Vienam-Cambodia-Thailand marine economic corridor, Phu Quoc island district covers more than 589sq.km with a population of over 96,940. It comprises 27 islands with Phu Quoc being the largest.

As a tourist hub in Kien Giang, Phu Quoc, dubbed the Pearl Island, has also earned reputation worldwide. Phu Quoc Airport welcomed more than 5,600 flights with as many as 666,000 passengers in the first eight months of 2014.

Over the past eight years, Phu Quoc’s economy has seen a strong development towards tourism and services, with average growth of 26 percent a year and per capita income of 82 million VND a year.
Source: VNA
Tags : Welcome to Phu Quoc
Share This :